Deze webinar is in het Engels 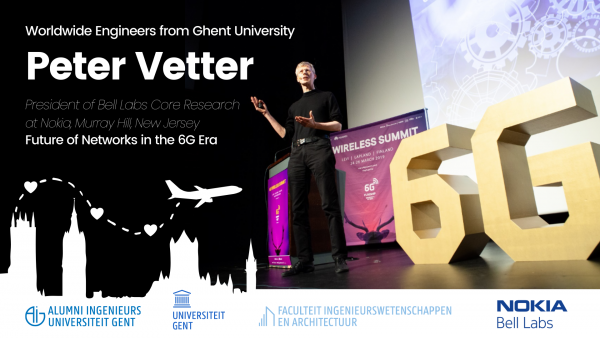 Peter Vetter is President of Bell Labs Core Research at Nokia Bell Labs and is leading an eminent global team with the mission to invent game changing innovations that define the future of networks. Bell Labs Core Research is exploring and innovating the key technologies that will prepare Nokia’s core business for the 6G era on a 10-year horizon. That includes foundational research on network architecture, programmable-network systems and security, optical systems and components, mobile radio systems, and platforms and ASICs.

Previously under his leadership the Bell Labs Access & Device Research Lab made some of its most significant discoveries and established new milestones in fixed and wireless communications. Many of those innovations form the backbone of Nokia’s mobile and broadband products today. He was also co-founder of an internal venture that produced the first FTTH product in Alcatel (now part of Nokia) in 2000.

He received the degree of Physics Engineer from Gent University (Belgium) in 1986 and a PhD with Prof. H. Pauwels in 1991. After a post-doctoral fellowship with Prof. T. Uchida at Tohoku University (Japan), he joined the research center of Alcatel (now Nokia) in Antwerp in 1993. Since 2009, he has worked at Bell Labs in Murray Hill, New Jersey, and has been on the senior leadership team of Bell Labs since 2013. He has authored over a hundred international papers and presented keynotes and tutorials at major technical industry events. Peter Vetter is Bell Labs Fellow and IEEE Fellow.

Bell Labs research has always been guided by a vision of future applications in order to solve hard technical problems that serve a real-world need. The 6G era will be defined by the symbiosis of digital, physical, and human worlds with the goal to unleash human productivity and wellbeing. While in the 5G era, with thanks to the massive scale deployment of sensors, the digital world perfectly captures past and current states of the physical world, the connection of these two worlds with the human or cognitive world remain largely unaddressed. We believe that in the 6G era cognitive systems will anticipate individual and collective intents to plan for actions in the worlds that optimally serve human needs.

For that to happen we will need to witness significant advances in artificial intelligence, computing and sensing technologies. The 6G network will be the essential infrastructure for the integration of these future capabilities. The presentation will address some challenges and research directions in areas of 6G radio networks, essential network fabric, frictionless networking, and security.

At the end of my talk, I’ll also briefly reflect on working abroad, first as post-doc in Japan and later as research leader in the US.